A certain artist traditional figure still exists in our cultural imaginary, which presents it as a singular individual who combine inspiration and talent, meaning the ability of produce ideas with the expertise of express them. The archetype of the romantic genius clearly illustrates this sort of artisan who’s been touched for the grace and who has the power of model matter according to the mysterious subtleness of the spirit.

It has been a while since that ideal modern artist is in decadence, in a process defined by the appear of new esthetic production models. Among them, the generative art uses an interesting resource. In order to disarticulate the total control that the artist had in their work –in which every single detail could been attributed to his decision or will– generativity experiments with different ways to loose control and to welcome the chance and surprise. For that purpose, the artist builds systems with some level of autonomy which take an important role in the production process. They are, literally, automaton: as if the artist delegated the work to an artificial creature, a sort of Frankenstein –always a little unpredictable and rebel– which is in charge of execute the work on behave of the artist’s name.

I like to think in that way of work I practice as a creative collaboration part human and part no human: the artist and the automaton begin a productive dialogue from whom emerge things that couldn’t be produced or even imagined by the human itself. This hybrid creator that results from the combination of these two parts (human an automaton) throw into crisis not just the talent, but also the inspiration. It produces art which is not entirely human, neither entirely automaton: it is something in between, like a cyborg.

This exhibition presents some examples of co-created images with three different –but related– automatons. Everyone of them have been developed in programming languages (Processing and ActionScript) and they have in common the fact that they don’t know anything about de exterior world: they are isolated systems, without input, which creates from a set of rules and a dose of chance. We could say they operate in the emptiness or they create from the nothingness. The process starts in all three cases by disponing some marks in a bi-dimensional space (blueprint), sometimes entirely at random and sometimes restricting that randomness by using certain rules. Afterwards, that abstract structure becomes visible with another set of rules which manages color and form.

The Angular scenes interact with different variations and extensions of an extended known algorithm named ‘Voronoi’, which subdivide the blueprint according to the distance related to the original set of marks. Different combination and mixing rules for the colors assigned to those marks produce “styles” from the geometric abstraction to a sort of digital cubism, through apparent tridimensional effects.

The Folded colors simplified the color process, leaving slopes to become the blueprint, but turn into more sophisticated the marks disposition in it. Thus, include repetition and symmetry that suggest architectural o natural structures. Math abstraction becomes illustrative thanks to the fact the chance stays balanced with forms which bring a “figuration effect”.

Finally, the Hairy graphs become more explicitly vegetable through a drawing process that makes spring up from every mark a particle flow that draw. Those particles slide according to they own combination of chance and rules, leaving lines in their path like threads, sprouts or tentacles that growths above an invisible structure. 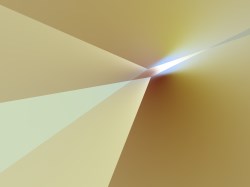 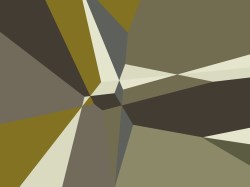 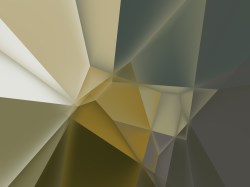 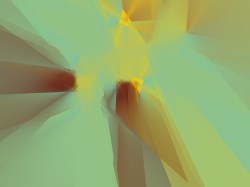 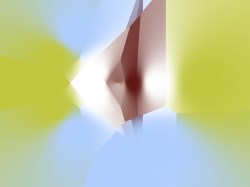 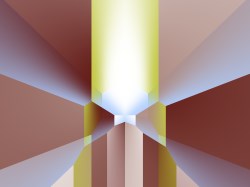 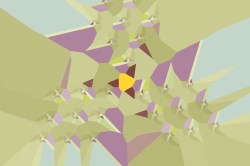 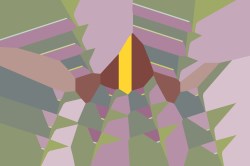 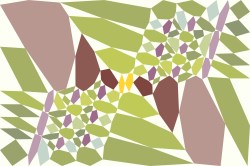 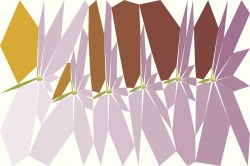 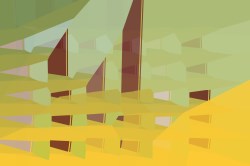 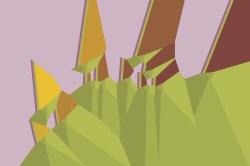 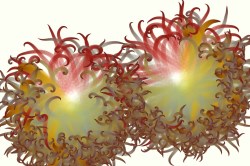 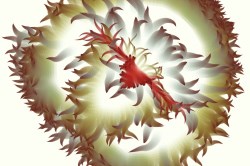 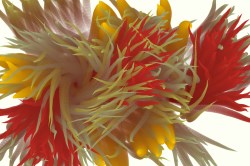 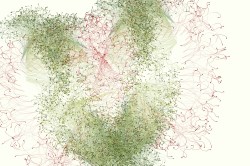 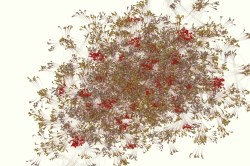 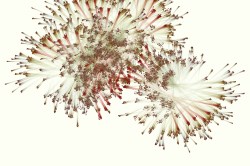 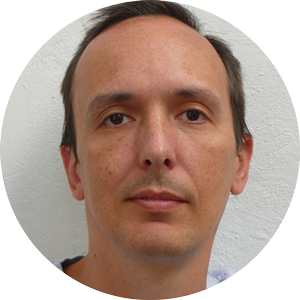